At Langan Stained glass we usually conserve stained glass, though we may use the term restoration to help people better understand what we do.  This means that we always seek to retain the original stained glass and preserve it using a number of conservation techniques, documentation and reversibility being key.  Our policy is to use minimal intervention other than giving the class a thorough clean using non destructive methods and releading which is usually necessary if it has been deemed that the glass needs to be removed for repair.

Stained glass restoration and conservation in the studio

Colette Langan received an extensive training in stained glass conservation with Chapel Studio in the UK and was there from the beginning of the establishment of the conservation department, led by Alfred Fisher.  She later  worked with Steven Clare in the development of isothermal glazing in the 1990’s.  While there she worked on medieval glass from Westminster Abbey, Winchester Cathedral, Lincoln Cathedral and many other landmark buildings in the UK.  She also conserved windows by William Morris, Pugin, Kempe, Tiffany and Harry Clarke in her own studio in Ireland. 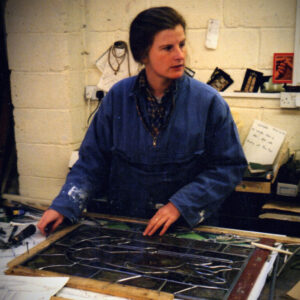